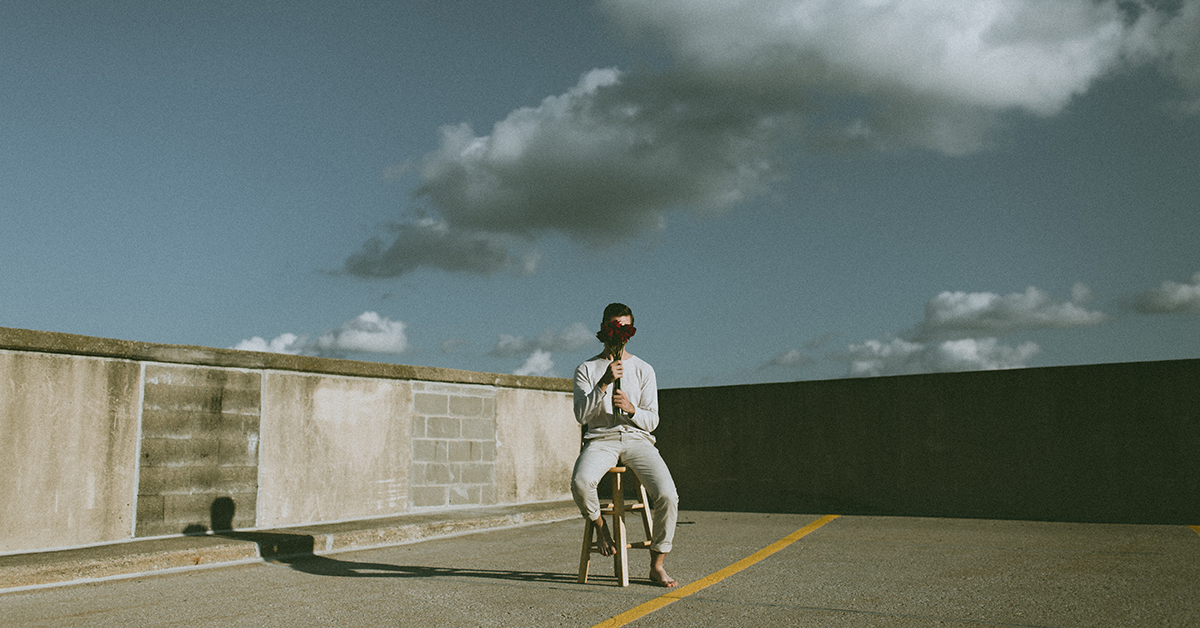 Posted at 16:18h in Artist Interviews by Ivy Cayden

If you’re in search of a new indie track that knocks the norm into oblivion, you’ve arrived. West Michigan’s dream-pop solo act Dawning just released its second single, “Rose Lights,” and it couldn’t have dropped at a better time. As we suddenly find ourselves in fall (with or without pumpkin-themed refreshments), some reflection on the prior season seems only natural. And nostalgia for this past summer and summers long passed will flood your mind when Aaron Senor’s radiant voice dances with the beautifully bare but well-balanced sound of the acoustic guitar. The at times surprising, always luxurious, all-consuming vocal layers laced in “Rose Lights” will absolutely devour your current reality and transport you to places only you (and the those who have been close to you) know. (Listen while you read.)

To quote a favorite lyric might entail listing most of them, but these lines seem to linger with me long after I listen:

“In my life, August came and went too soon,
Summer love, falling in and out of you.”

With the air of a seasoned traveler, Aaron wraps this arresting track with the faint but cheerful chirps of birds—gently returning you to your previously present state and concluding your round-trip adventure. I love Dawning’s intricate attention to detail, present even in the last several seconds of “Rose Lights.”

In this interview, you’ll learn: how Aaron’s respective roles as the drummer of Michigander and the dream-pop solo act Dawning elevate him to the top of his game by building complementary skills; which iconic band the chorus in “Rose Lights” reminded Aaron of after he’d written it; why “Rose Lights” steers clear of any current sonic trends and carries no easily recognizable timestamp; where this transportive track was recorded, produced, mixed, and mastered; how the sound of “Rose Lights” compares to the sound of Dawning’s first single “Coronation;” why Aaron continues to take artistic risks with Dawning; and where *you* should listen to “Rose Lights.”

How do you manage to stay on top of your game both as the drummer of Michigander and as the dream-pop solo act Dawning?

Aaron: Schedule-wise, I stay pretty busy between the two. When I’m not doing Michigander stuff, I’m always writing for Dawning. Although my roles in each band are completely different, the skillset required for each respectively helps me grow in the other. From Michigander, I feel like I’ve learned a lot about the organizational aspect of having a band, how to be a friend and leader at the same time, and how to communicate knowing what I want—which has all helped me organizationally with Dawning. In Dawning, I feel like being a front man has made me a better ‘performer,’ and has made me more conscientious as far as listening to the band a whole, which in turn has made me focused less on myself and what I’m playing and more focused on what everyone else is playing. These things make me a better performer but also a little more restrained when I play with Michigander. So, in a way, being in both keeps me at the top of my game by building complementary skills. I’m not a busybody by any means, but I love having a life immersed in music every day.

What do you want listeners to know about Dawning’s second single, “Rose Lights”? + Can you reveal something about the track no one knows yet?

Aaron: “Rose Lights” is only acoustic guitar and layers of vocals, with some other elements interspersed at times. When I first wrote the chorus, the melody reminded me of The Beach Boys, so I decided to take it further in that direction by adding a lot of vocal harmonies. I tried to use the voice in as many ways as I could think of without deferring to other instruments, unless I absolutely had to, because I think there is a certain timelessness in the human voice that is—to an extent—absent in other instruments.

While they’re all great in their own right, I think synthesizers, electric guitars, and the different styles melodic and rhythmic instruments are played in often can be a clear product of their time and influenced by current trends, making them easily categorized into a recognizable period of music not long after they’re released. That’s not a bad thing whatsoever, but, as far as my goals with this song, I wanted it to evoke memories or a feeling of nostalgia. I tried to remove any elements that would sonically root it in the year its being released, keeping it to a simple strum pattern and a lot of voices. I watched an interview with Eric Whitacre recently where he mentioned a quote that says, “The human voice is the only instrument God created,” and that really stuck with me and influenced the production for this song (and many others of mine) being so reliant on the voice. There’s something that happens viscerally, biologically, and spiritually to me when groups of voices sing in harmony.

Where did you record the track + how did you prepare yourself for such an emotional outpouring in studio?

Aaron: I recorded, produced, and played all the instruments for this song alone in my bedroom. I then had Jake Rye of Social Recording Company mix it and Mike Cervantes at The Foxboro master it. With that being the case, I didn’t have to be too concerned with how other people perceived the things that the song expresses.

You know, it’s funny. I listened to this song after I got the final masters back a few weeks ago, and that’s when it really hit me. This song is very personal, and it honestly scared me. I finally took stock of the fact that I was really going to send these thoughts and feelings into the world in a very public way. It’s easy to be mushy and romantic lyrically when you’re alone in your room and nobody’s around, and end up writing a tune you think is good and go on to record and release it. It was only after deciding that and doing all of the studio work and technical stuff that the vulnerability of the song began to scare me. In the end, my response to that fear ended up being, if it doesn’t scare me, it’s not worth doing in the first place.

That’s been my response with a lot of things with Dawning, from odd conceptual videos we’ve made to wearing funny outfits onstage and now to this. All those things have carried some degree of fear, but I decided early on that if I’m not taking risks in art more broadly, if I’m not bordering on the ridiculous or showing people something they don’t see every day—or being honest in expressing myself—then I don’t want to do it.

How would you describe the sound of this single + how does it compare to the sound of Dawning’s first single “Coronation”?

Aaron: If you are expecting another song like “Coronation,” you may be in for a surprise. I tried to have “Rose Lights” be different in as many ways as possible from “Coronation,” not because I dislike “Coronation” by any means, but because with Dawning I want to subvert expectations as much as possible. I want pleasant surprise to be the only consistent expectation people have of my music. Where Coronation’s lyrics lean more on indirect imagery that are more open to interpretation, Rose Lights’ lyrics are direct and personal. Where Coronation is dynamically large and synth driven, Rose Lights is quiet and only has acoustic guitar and vocals for the most part. I intentionally did not want to rely on my usual production elements in order to push myself. It was difficult to produce, but I learned a lot in the process.

In an ideal world, where would you LOVE to hear “Rose Lights” played?