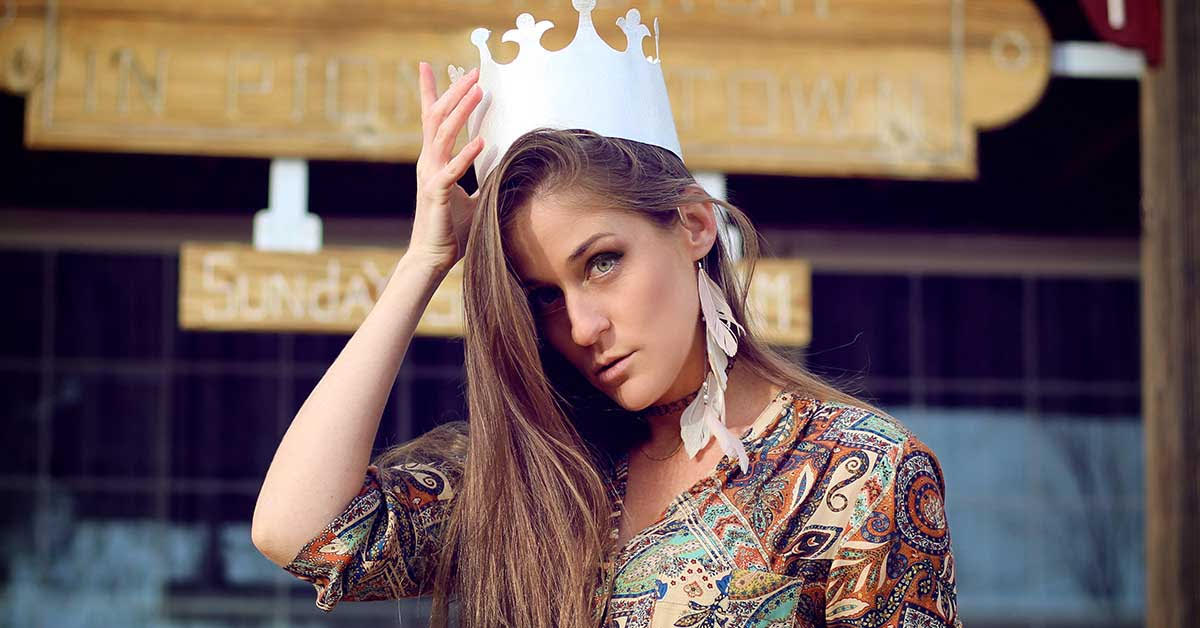 Posted at 16:19h in Artist Interviews by Ivy Cayden

Ladies (and feminists), for a not-so-subtle reminder of your worth, power, and potential, play “Wild Card” at a vigorous volume. (Listen + dance while you read.) French Caribbean-born singer-songwriter Moana A teamed up with LA-based producer LAIN to release this fierce, indie-pop anthem of female empowerment. Turn to this track whenever you need an extra dose of “I can. I will. Watch me.” or need to deliver a strong shot of “NO.”

The rebellious, no-limits lyrics—and the beautiful but BOLD vocals Moana A delivers them with—fits seamlessly with the song’s modern, Western vibe. (Trust me, this track isn’t sleepy; it’s the flame you’ve been looking for.) You won’t want to keep this sassy single to yourself, either. Serenade strangers, send it to your friends, slide it in playlists, and refuse to conform…which reminds me of my favorite “Wild Card” verse:

“I won’t play nice, I won’t think twice,
I make the rules, I roll the dice.
Nobody else dictates my life.
Don’t want your help or your advice.”

In this interview you’ll learn: what spurred Moana A to write such a spirited female empowerment anthem; why Moana A and LAIN teamed up and cultivated their synergy; which two LA-based studios they recorded in; when “Wild Card” took on its fresh, Western vibe; how Moana A’s atypical upbringing in Saint Martin and young adult experiences in the US shaped her into the Wild Card she clearly is today; what song from which award-winning movie she turns to when she needs an extra boost; what new-to-her music style she’s recently embraced and why; and a pretty BIG hint about her next release.

Tell us what spurred you to write such a spirited female empowerment anthem.

Moana A: I’ve been writing a lot of music in a lot of genres for the last two years, and what I kept hearing from people in the industry was that I should just stick to one style, not to confuse people. I should find that one thing I am good at and basically turn myself into a marketing product. But I’m an artist, and I don’t fit into a box. I feel like it’s a little unfair to expect musicians to be one dimensional so they’re easier to promote. I’m not desperately trying to be a rebel or be different just for the sake of it. When you make music, you don’t decide where your inspiration is going to go. I tried expressing these feelings to industry executives, and they usually rolled their eyes and said something like, “Yeahhh, good luck with that….”

I vented my frustration by putting a note in my phone about what I was feeling. When I met up with LAIN in the studio, we agreed that we should write something empowering. And I remembered that note, pulled it up, and started singing a random melody on whatever I had written. He then dropped his pen and paper and said, “Yeah, that’s what we are writing about. That’s it. We’re done.”

The rest came pretty easily, because it became about all those times I was told, “You shouldn’t do this or you shouldn’t do that,” or, “Oh, you know, women are not supposed to do that.” You should be able to do whatever you want and not have to be consistent. I experienced so much of this in music school and heard many similar stories from my friends in music school, too. Before Berklee, I studied science with mostly guys, who often made incorrect assumptions about me. I’d have to say, “I can be whoever I want. I don’t have to fit into a specific type.” And that’s how “Wild Card” became about female empowerment.

Did you always imagine it possessing a fresh Western vibe?

Moana A: That didn’t come from me. I read the note and sung it at the same time, and we wrote chords to it right away. After I went home, LAIN sent me the draft and said, “…sooo I had this idea of doing like this Western thing, I don’t know what you think of it.”  It sounded very original with a present-day-kind-of-pop sound. I thought it was really cool, so we kept it.

What was it like working with LAIN? How did you pair up for the track and establish such a synergy?

Moana A: We’re actually both Berklee graduates and we have friends in common. LAIN heard a song that I co-wrote with a friend of his—I think a year and a half ago—so he reached out to collaborate. We started writing this song about a year ago. I think that’s partly why the synergy happened, because we had so many sessions. He really wanted “Wild Card” to be so polished. We kept going back to it, and anytime I had the slightest doubt, LAIN would say, “No, we won’t go with it until you are happy with it.”

LAIN was very patient throughout the whole process. Sometimes I had fixed ideas, like the rhythm of the chorus and the verse. I was very particular about how it had to fall. I didn’t want it to fall where you’d expect it to, and he said, “We will keep going until it becomes what you have in your mind.” That was helpful. I was also very particular about the “uh huh.” I felt like that added to the attitude of the song, and I had a specific idea of how they should stand out in the track. And, again, LAIN waited until I was happy with how they fell. The synergy grew from all the sessions we had for even the slightest details—and now those details sound exactly the way we wanted them to.

I’ve been writing a lot, and I think there’s a reason that this song is the first to come out. While I really like all the others, it’s also true that I’ve been working with busy people. They don’t have time to keep revisiting the same track to change a breath here or there. And they’ll say things like, “Yeah, it doesn’t matter. The rest works. Okay, good, let’s move on.” “Wild Card” sounds special, because we really took the time to polish it.

Where was “Wild Card” recorded?

Moana A: We recorded a lot of it in LAIN’s home studio in Glendale, and then we went to Silver Gun Records, a studio in Silver Lake that our friends manage. The studio also runs an indie label out of there. They have really good mics, so that’s where we recorded my vocals. Then we brought my boyfriend Ananda in to record the bass and guitar. Afterward, we went back to LAIN’s home studio with three of my friends to record the gang vocals for the bridge (the call-and-response part). Some of the vocal takes we ended up using were from LAIN’s closet, just because the energy felt bigger.

What’s made you the Wild Card you clearly are today?

Moana A: I was lucky. I grew up on a sailboat on a French island in the Caribbean, so I feel like my life already started out atypical. I was used to not fitting in from the beginning. Also, Saint Martin, the island I grew up on, is very eclectic. People speak four languages in the same sentence. We have three currencies. The same radio station will play reggae, rock, country, and hip-hop back to back. Everybody is doing everything—it’s all over the place.

Also, both of my parents are artists, so I felt like I was always allowed to be ALL the things. Once I became a teenager and grew closer to becoming a woman, I moved to the US and began hearing all these rules and things that didn’t make sense to me. I tend to be a shy, sensitive person until a certain point. For a while, I let people walk all over me. I would over accommodate them. But then I would reach a certain point, explode, and say, “THIS IS NOT OKAY!”

Now that I’m older, I just don’t get to that point anymore. I try to set clear limits from the beginning, and—when people try to overstep their boundaries—I’m very clear and try to find a nice way to express it. Sometimes, female empowerment can be very aggressive, and I don’t feel like that’s a welcoming message at all. We don’t need to be at war with the world, but I feel like there’s a way to just clearly set your limits, and say, “This is what I do, this is how far you’re allowed to go, and that’s it.” It’s tricky and it takes most people a while to get confident enough with themselves to say “no” when they should, but it’s important.

“No” is a very powerful word. As you’re growing up (especially in school) and later, particularly in competitive industries, you’re often taught to say “yes” and take on EVERYTHING you possibly can to the point of breaking. Sometimes—and many times—saying “no” might yield a better outcome or product, because you’ve been more focused on who you are and what you want to produce.

Moana A: That’s so true, and I feel like the next generation is getting this better. I work a lot with kids, and I’m very hopeful when I teach kids music because they have so much personality. I’m realizing now how much we were not taught that when we were growing up.

What do you hope listeners take away from this invigorating, dance-worthy track?

Moana A: I hope it empowers listeners and gives them that extra boost. Whenever I need motivation, I put on “This Is Me” from The Greatest Showman. It makes me feel like, Yes! I can do anything! The song’s message is similar; it’s about showing up as who you are, not letting the world eat you, not accommodating everyone else, and just being YOU. I want “Wild Card” to feel that same way for listeners.

What’s next for you?

Moana A: Lately, I’ve really enjoyed working with film composers as opposed to producers like I had before. I’ve been doing cinematic orchestral pop. It’s a new style to me. As a studio singer, I’ve always had to play around with my voice and adapt to different styles, but I love that these tracks are so powerful because they’re made with strings and big, orchestral drums. I can get super dramatic in my singing, and it was a real revelation to me. THIS is what I want to do. I have a Kelly Clarkson cover in that style coming out next. It’s already mixed and mastered. We just have to find the best time to release it.